Mama DiMarco (me) has been pretty MIA on this webpage. Bad Mama DiMarco, baddddddd! But I am back with many rants and raves! I have SO MUCH to share and this post will highlight some of my 2016 RAVES (RANTS coming later this week) as an actor, teacher, producer, casting director and filmmaker. And a few personal ones too…

(Being on David S. Hogan’s arm always makes me feel like a star)

Mighty Tripod Productions first feature film, Paralytic, made it into SIFF! We couldn’t be more proud! It was truly a milestone for many of us: the actors, the crew, the producers and our company, MTP. All the hard work and tears paid off. We sold out BOTH screenings and were moved to larger venues. Each audience had great feedback and the community really showed up in full force to support us. David and I are so grateful that our director/writer/producer, Joey Johnson, gave us the opportunity to make this film with him. We have deals in the works for distribution and more.

Earlier this year I got to work at Village Theatre with Kathryn Van Meter directing me as Chick Boyle in Crimes of the Heart. I worked alongside women and men who I admire, and was on stage with them for months. Dreams come true!

Brides To Be by First Sight Productions, directed and written by Lindy and Kris Boustedt got into MANY film festivals, and it’s also available ONLINE NOW! Annnddd Brides to Be went to GERMANY! BOOM! This started with a short film, Together Forever, and after we got MILLIONS of views we knew we had to make the feature. All the artists involved in making the short and the feature put their full hearts into it, and it shows. I couldn’t be more proud! Thank you Kris and Lindy for letting me be your Robin.

Team Mighty Tripod competed in the Seattle 48 Hour Film Project and we WON! We pulled dark comedy and made a film about a special kind of support group. Our film, One Step Too Far, brought home best score, the spirit award and BEST OF THE FEST. This means our film will screen and compete in Filmapalooza 2017!

In March, David and I had an epic trip to Alaska with his mom. During the summer, my best friend, Meg McLynn, got married. I made more films with my incredible sister and her company Blue Forge Productions, one of which garnered me a best actress award. I also got to make another feature film, The Fairy’s Game,  with Elijah Nelson (my son from Switchmas). And our Mighty Tripod Acting Studio for adults and youth is rocking! 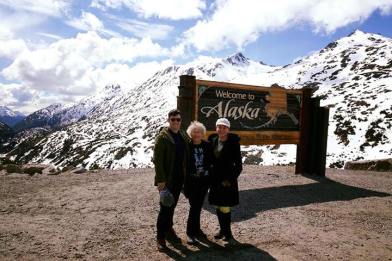 Did I mention I got to bring my Moms to SIFF and get a Red Carpet photo with them? Or how our film Cost of Things by Mighty Tripod was an official selection in Hollyshorts Film Festival and Seattle Shorts Film Festival? I also got to film more of the wacky series, Stroller Gangs, by Tom Skerritt. I cast my first TV Pilot (Tabitha Witch of the Order), and was thrilled to cast all Seattle actors. I LOVED my 2016 headshot session with the fabulous Lisa Levan.

And, to wrap the year up artistically before the Holidays, I had the honor of stepping into the shoes of Sylvia in my debut at Theatre 22 in The Pride.  The Pride is a play about loneliness, the layers of love, and how every life has it’s struggles. Thank you, Corey, for inviting me to tell this story with you.

Alright, Alright, I know, I know, enough is enough, Angela. Well, that’s what happens when I’m away for too long. I’m sure I have forgotten something and will need to add it in later, but for now I have a smile on my face and am beyond proud of #FilmInWA #SeaTheatre #MightyTripod, and all my artist sisters and brothers. I will start to compose my RANTS blog for the end of the week. I WILL BE BACK!